Preparations for Etching and my Pig in Jacket

I have bought a few basics for etching. Some small zinc plates, some hard and soft ground and a scraper/burnisher.

But for etching on metals you need lots more stuff and I had to read up how to do it again. A file for the edges, a hot plate (or the cooker :) for warming the plate for the application of the ground and a roller for applying this sort of ball ground (which I don’t have). Then there is the etching solution.

I found an old file of Dads and filed down the edges of a small 4 x4 inch zinc block which I bought from the very nice people at Hawthorn Printmaking who have supplied lots of my printmaking stuff, the etching chemicals and lino and inks and a roller etc. They are a great company.
You bevel and polish the edges to stop them cutting into the paper and the blankets and in order not to have a black border. It should be a smooth bevel… mine was a bit rough.. but I think it’s all in the technique. 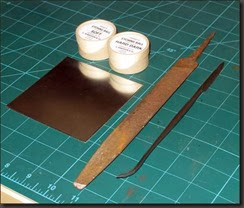 After that it’s degreasing the plate with some Comet and then my very hit and miss application of the hard ground. I don’t have a roller I can sacrifice so tried to brush it on. 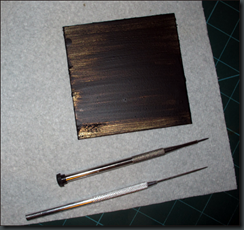 It started off much too thick and so chipped when I scratched into it, so I tried again. Then I thought it was too thin.Then seemed too patchy. In all I started drawing different things on this block and then reapplying the ground 4 times.

Eventually, it just had to do and I made a sketch of my Pig in Jacket. It’s a little porcelain pig which I had for many years. Sadly, along with almost everything else I owned it was lost 3 years ago in the fire. But because of the pig project I looked out a photo. He is very sweet and deserves a really nice drawing or painting which I will get round to soon.
The next step was taping the back of the plate so that it doesn’t disintegrate in the etch. 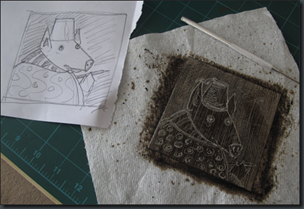 Sketch, and patchy hard ground with the drawing

Next I made the etching solution which I had to look up online. It’s basically copper sulphate and salt. It’s the first time I have ever made up an etching solution, the only other times I have etched a plate the tutors had a nice acid solution made up.

This is classed as “ non toxic” .. but should perhaps be called less toxic. It’s a beautiful blue green liquid and when the plate went in I had no idea how long to leave it in or what would happen. I gave it about 10 mins and took it out thinking it was a complete disaster and that my patchy ground was a failure..but.. to be honest it wasn’t too bad! 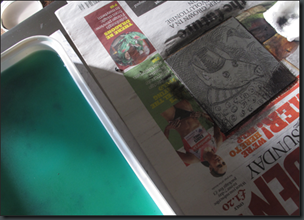 The green etching solution and the hard ground being removed.

I removed the ground to reveal something like the image I had expected with a few strange additions. It’s a bit of a mess because I had started drawing into the ground a few times so there are some odd scratches here and there which don’t really make sense but, actually, I was amazed it worked. Another bit of printy magic.

I was rather too keen to get some images printed and made a few really poor pale prints before realising I would have to tighten the press much more and leave more ink on.

Eventually by 5 o’clock I had a few prints left on the table and lots more in the bin. 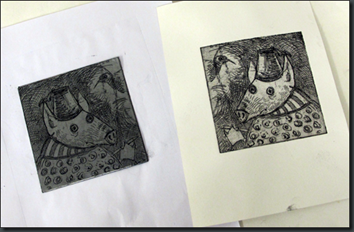 The Plate and the Pig 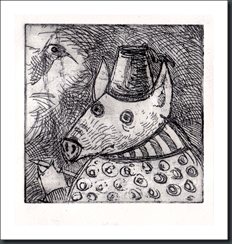 My Pig in Jacket…with a bird which seems to have a strange lasso thing round it’s head. Either that or the pig is wielding a small hacksaw.. Hmm…who knows.

Posted by sharp green pencil at 10:09 AM

Get Glacial Print Progress to your inbox ...